One thing I think we must know - that our traditional gender roles will not be part of the future, as long as the future is not a new Stone Age. Our traditions, our books, our morals, our manners, our films, our speech, our economic organization, everything we have inherited, tell us that to be a Man one must bend Nature to one's will - or other men. This means ecological catastrophe in the first instance and war in the second. To be a Woman, one must be first and foremost a mother and after that a server of Men; this means overpopulation and the perpetuation of the first two disasters. The roles are deadly. The myths that serve them are fatal. Women cannot write - using the old myths. But using new ones - ?

Slutningen på Joanna Russ' strålende essay "What Can a Heroine Do? Or Why Women Can't Write" (1971)
Posted by Susanne Christensen at 2:52 PM 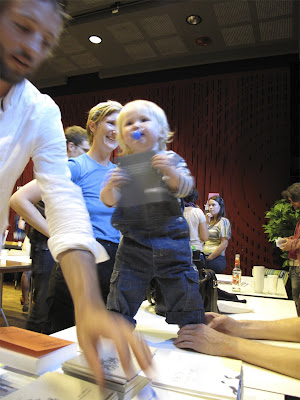 Get yer fanzine shoes on! Norsk Fanzinekongress idag ----- Mere her.
Posted by Susanne Christensen at 12:20 PM

The women say with an oath, it was by a trick that he expelled you from the earthly paradise, cringing he insinuated himself next to you, he robbed you of that passion for knowledge of which it is written that it has the wings of the eagle, the eyes of the owl, the feet of the dragon. He has enslaved you by trickery, you who were great strong valiant. He has stolen your wisdom from you, he has closed your memory to what you were, he has made of you that which is not which does not speak which does not possess which does not write, he has made of you a vile and fallen creature, he has gagged abused betrayed you. By means of stratagems he has stultified your under- standing, he has woven around you a long list of defects that he declares essential to your wellbeing, to your nature. He has in- vented your history. But the time approaches when you shall crush the serpent under your heel, the time approaches when you can cry, erect, filled with ardour and courage, Paradise exists in the shadow of the sword.